The Mid Week Social for April ventured to Dartmouth. All started well with everyone meeting in the Cherub at noon. Twelve members had arrived from far and wide including Exeter, Dawlish, Teignmouth and Torquay via Paignton and the 120 bus to Kingswear, then over the Dart by ferry. Everyone arrived at once so, of course, the Jail Ale was being pulled through a handpull that was connected to water. As soon as this was corrected the Proper Job went, leaving a choice of either Jail Ale or St. Austell Brewery's Hicks. There was also Weston's Old Rosie cider available on handpull.

Having recovered from the journey it was decided that Dartmouth Yacht Club would be the next stop and this is where it all started to fall apart. An advance party set off leaving the rest "we know where it is" to follow on. The Yacht Club had three beers on offer: Tribute, Otter Ale and one from Salcombe. Unfortunately the rest of the party failed to arrive! They were later found to be in the Floating Bridge having mistaken the Rowing Club for the Yacht Club; as far the wrong way in Dartmouth as it's possible to get!.

The reduced party then moved on to the Dartmouth Arms where Exile Wicked Wolf and Otter Ale were available, unfortunately the sole member of staff was very busy serving food, so after waiting about 5 minutes we gave up and moved on to the Seven Stars.

In the SevenStars we had the choice of either South Ham's Stumble Bee or Jail Ale again. After a pleasant interlude here we moved on heading for the Seale Arms. However, on the way, we came across the recently opened Brewed Boy, which caused some interest and it was decided to investigate further.. The Brewed Boy is a single roomed micro bar offering mostly craft keg beers on tap and in cans. There were 8 taps offering a choice of keg beers and ciders. Most of us tried a half of Imaginary Friends Stout at £5 per pint. General opinion was too cold and a bit fizzy but quite tasty.

Next stop was the Seale Arms - Doom Bar only - where we met up with the rest of our party. Some decided not to linger and everyone soon moved on to the Dartmouth Conservative Club, conveniently next door. On offer here were Doom Bar yet again plus Tribute nd Exeter Brewery's Avocet. The Club has a large comfortable lounge away from the bustle of Dartmouth town centre.

Next stop was the Dolphin, an interesting, busy town pub next to the market, here the offering was just Tribute. The last call of the day was the Royal Castle, now owned by St Austell. Not surprisingly there were three St Austell beers on handpull: Proper Job, Tribute and Simply Mosaic - a popular choice.. From here most headed back to the ferry to catch the 120 back to Paignton. All in all a good day out despite half the party getting lost! 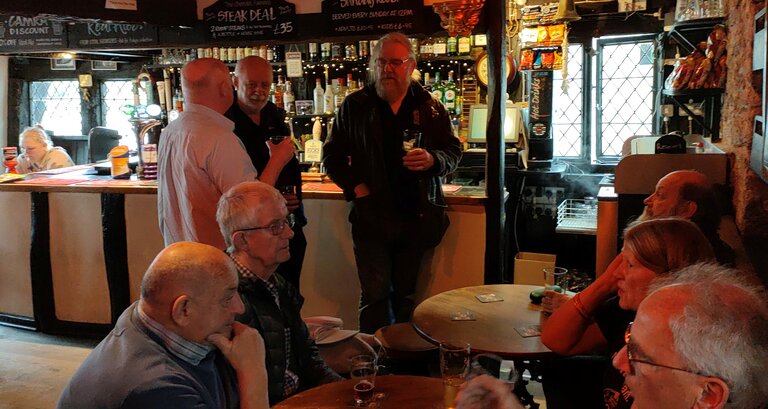 Meeting in the Cherub 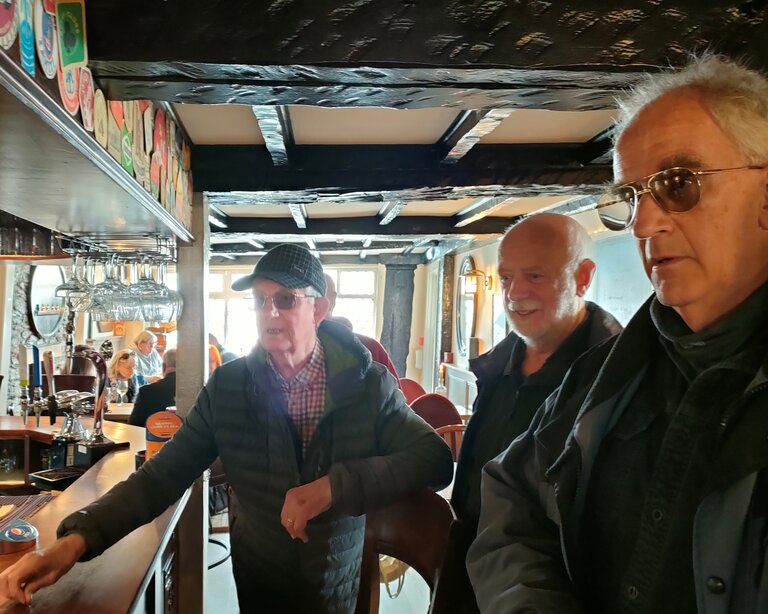 In the Seven Stars 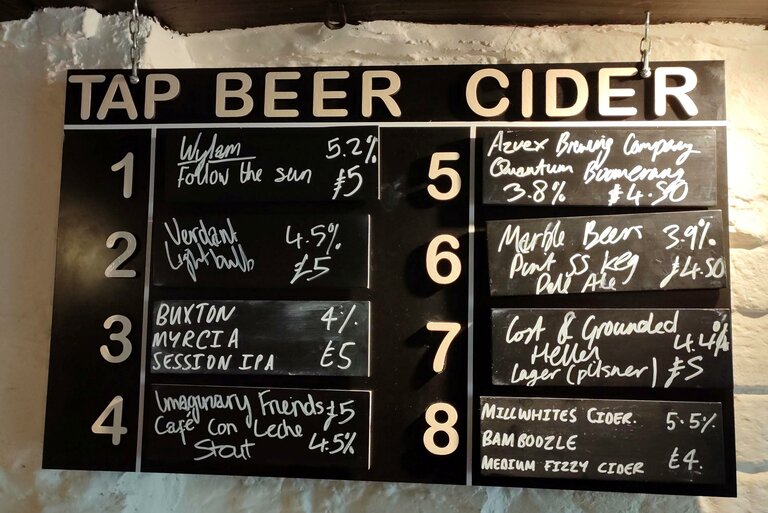 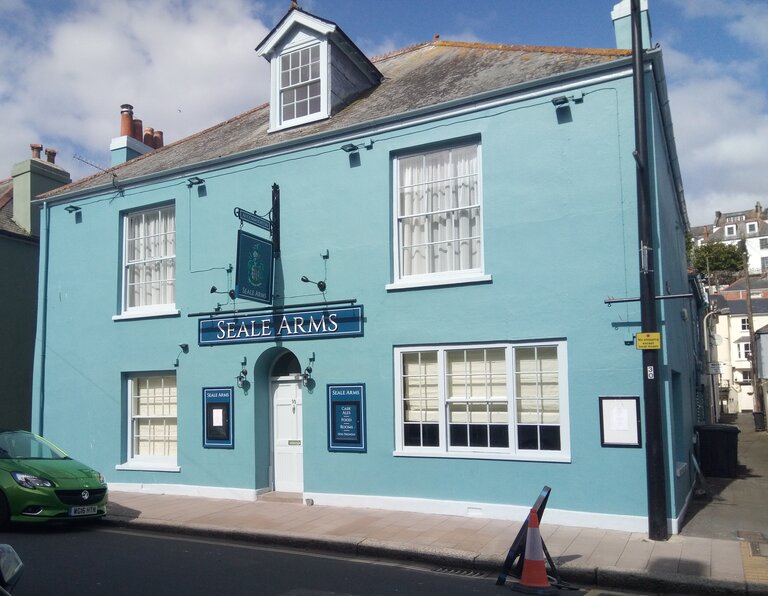 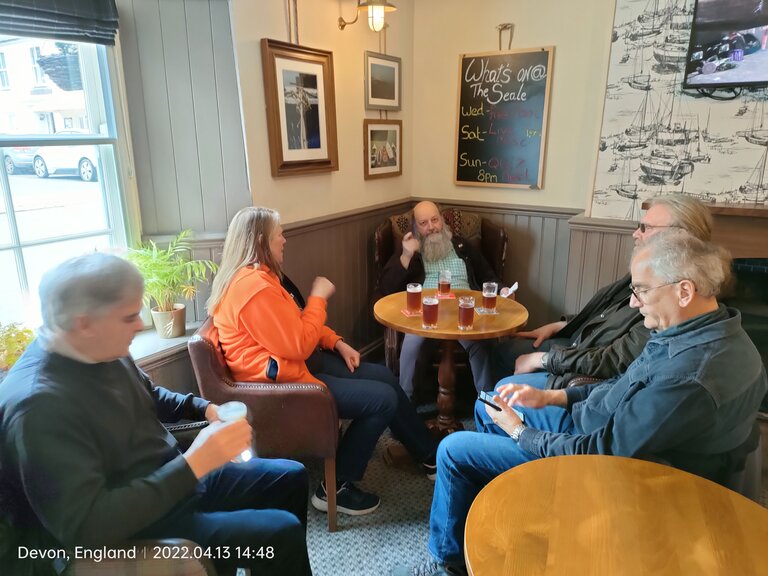 In the Seale Arms 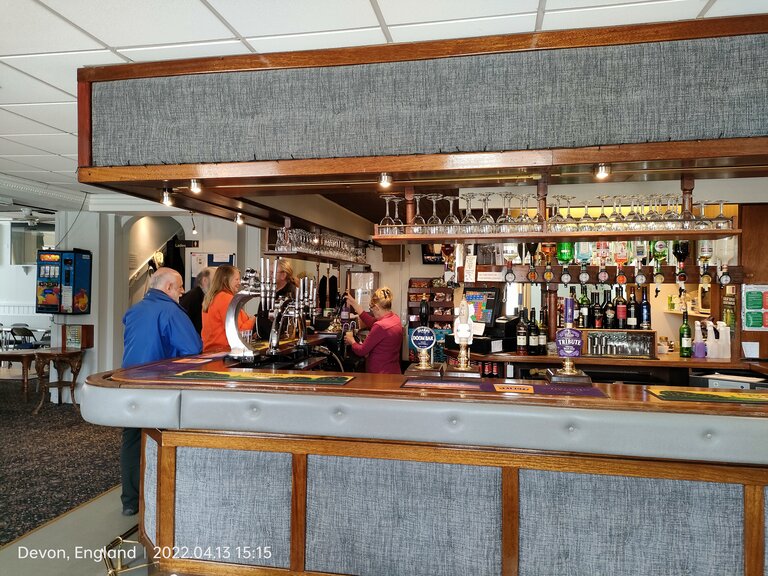 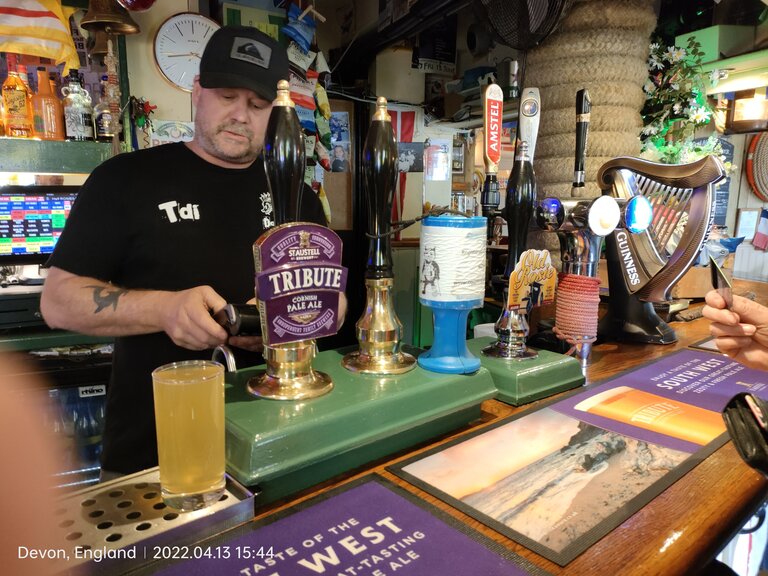 The Dolphin-not Tribute in the glass!!